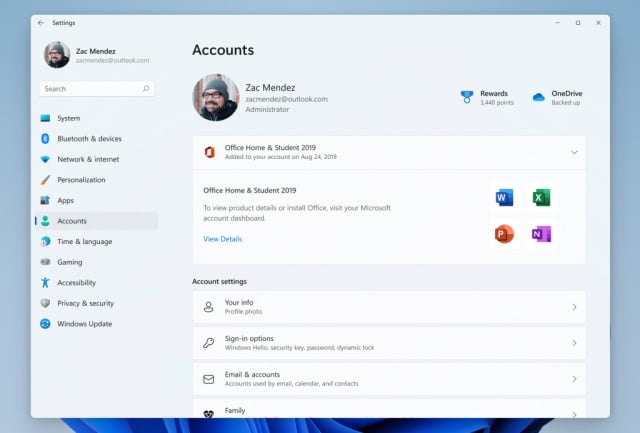 The latest build has just been launched on the Dev Channel, and it see the roll out of new account settings page improvements as well as numerous fixes. The chance in Settings means that it is easier to see details of view all supported Office perpetual products linked to your account, in addition to Microsoft 365 subscriptions

Announcing the changes that have been introduced in Windows 11 Insider Preview Build 25126, Microsoft says: “In October, we introduced subscription management in Settings > Accounts, which enabled you to view your Microsoft 365 subscriptions in Windows 11. With this build, we’re making it easier for you to view all supported Office perpetual products such as Office 2021 or Office 2019 associated with your account within Settings > Accounts”.

This update will allow you to view all supported Microsoft 365 Office products licensed to your account and you can view details about your product or install Office by clicking the “View Details” button. This information is shown on the Microsoft account management page and you will now be able to view these datils in Windows 11 via Settings > Accounts as shown in the above screenshot, starting with this build.

Microsoft points out that it is “beginning to roll this feature out, so it isn’t available to all Insiders just yet as we plan to monitor feedback and see how it lands before pushing it out to everyone”.

But Windows 11 Insider Preview Build 25126 is really a build that focus on bug fixes rather than adding a raft of new features. The full list of fixes looks like this:

We fixed the issue causing some Insiders to experience a bugcheck with error DRIVER_IRQL_NOT_LESS_OR_EQUAL in pci.sys causing a rollback trying to install the latest builds in the Dev Channel.We did work to mitigate the issue causing the Program Compatibility Assistant Service to use an unexpectedly large amount of CPU for some Insiders after upgrading to the latest Insider Preview builds in the Dev Channel.

If the touch keyboard is docked it should no longer unexpectedly dismiss when trying to edit the name of a folder in Start.

Fixed a high hitting explorer.exe crash that could happen when using Search.

The preview image under Personalization > Lock Screen should no longer be backwards when using an Arabic or Hebrew display language.

If explorer.exe has hung, that should no longer hang Task Manager.Fixed an issue where the context menus weren’t following the same mode (light or dark) as Task Manager itself for some Insiders.Fixed a typo in the “Minimize on use” tooltip.If you’ve hidden the graphs on the side of the Performance page, the color of the circles used instead should now match the graph in the summary view.Addressed an issue where the Not Responding status for certain apps wasn’t being reflected on the Processes page.

Removed the Lock option in Start menu as it didn’t work.

Fixed an issue where using “Open All Active Printers” from the printer icon in the system tray would unexpectedly open File Explorer when there were no active queues.

As this is a Dev build, it should come as little surprise that there are a handful of known issues; Microsoft shares details of problems that you could run into:

Some games that use Easy Anti-Cheat may crash or cause your PC to bugcheck.