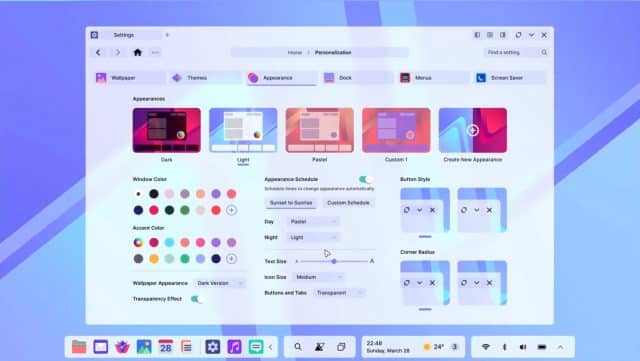 With Windows 11, Microsoft tried to give its operating system a more modern look and feel, with rounded corners and a centered taskbar. Unfortunately, the OS is still lacking certain features that were promised from the start, like native Android app support, although they are coming.

If you don’t want to use Windows 11, or Windows 10 for that matter, then your alternative choices tend to be restricted to macOS (if you have an Apple computer), Google OS (if that’s your thing), or one of the many Linux distros. But what if there was another way? AvdanOS is everything you could wish for, and more.

SEE ALSO: Windows XP 2021 is everything Windows 10 should be

Serial concept creator Kamer Kaan Avdan has previously given us updated versions of Windows 95, Windows XP, Windows 7, as well as Apple’s version of Windows 10, and Windows 20. He even delivered his vision of Windows 11 long before Windows 11 was even a thing (spoiler alert: It looks nothing like Microsoft’s actual new OS, but it’s arguably better).

Today, he puts all his considerable design skills and everything he’s learned to date, into creating a video showcasing his very own operating system — AvdanOS. This, like his many other concepts, doesn’t exist — you can’t download or install it — which is a huge shame, as it looks amazing.

His concept doesn’t really look like anything else out there, although it obviously borrows elements from other operating systems like Windows 11, macOS, iOS/iPadOS and Android.

There’s a centered ‘taskbar’ at the bottom of the screen, with open apps on the left, and key features include next level drag and drop, new ways to manage files and folders, and seriously advanced multi-tasking.

Changing the theme for the OS has been made very straightforward, and looks great. The new Settings screen is similarly both beautiful and practical.

I love what he’s done here, and how he hasn’t simply regurgitated past ideas. I just wish it was something I could switch to today. Take a look at the video below and tell me what you think of it in the comments.

If you want an idea of the work that goes into creating a concept like this, Avdan has posted a time lapse that provides a sneak peek of the creation of AvdanOS, which you can see here.