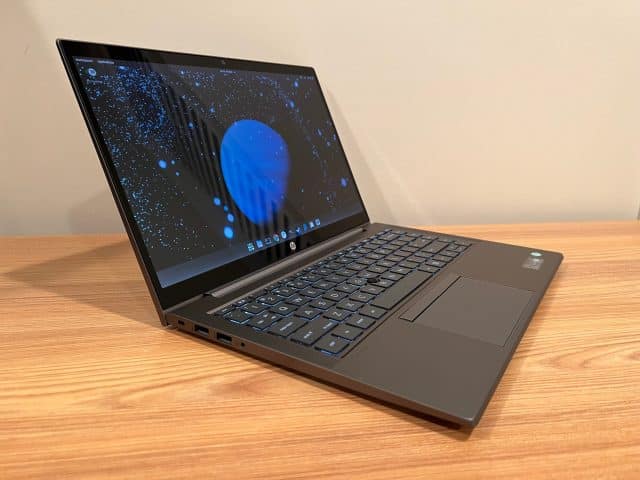 When I first learned that System76 and HP were partnering on a laptop running Pop!_OS, I was absolutely shocked. After all, System76 is a computer manufacturer, so HP is sort of one of its competitors. Not to mention, Pop!_OS isn’t exactly a well-known operating system outside the Linux community — it doesn’t carry the same name recognition as Ubuntu, for instance.

Regardless of why this collaboration happened, the HP Dev One laptop is officially here, available to anyone in the United States that has $1,099. We have been testing the new developer-focused notebook and we have definitive opinions to share, including whether or not you should buy it. So, without further ado…

The HP Dev One comes in only one configuration. Anyone that buys the computer gets an AMD Ryzen 7 PRO 5850U processor, 16GB RAM, and a 1TB NVMe SSD. That’s right, you cannot pay more for additional storage or memory when checking out. You can, however, do those upgrades yourself after you get the laptop. I rather like this approach, as it keeps things simple for shoppers, and let’s be honest, 16GB RAM and 1TB should be fine for most buyers — including the machine’s target audience of developers.

With all of that said, I am not a developer, and since I store most of my data in the cloud or on an external SSD, the RAM/storage configuration as it comes meets my needs entirely. Whether I am editing photos, writing, or gaming, never have I found performance to be lacking, but I like knowing I can upgrade those things in the future if needed.

When it comes to a laptop, there are some aspects that I value very highly, such as the keyboard, trackpad, display, and battery life — in that order. If any of those four things are deficient, I consider the computer to be a failure, but keyboard and trackpad are most important to me. I like to write and navigate quickly — typos or a janky mouse pointer will ruin my day quickly. 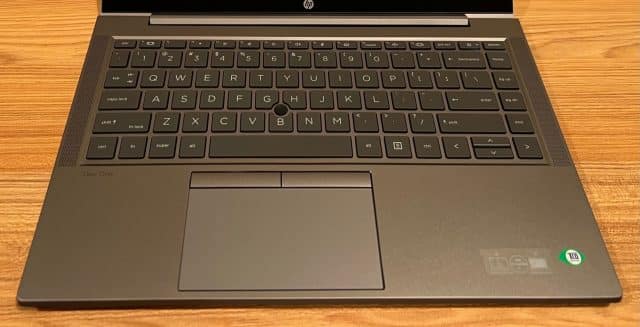 I am happy to report that both the keyboard and trackpad are exceptional and definitely meet my needs. The keyboard in particular is a pleasure to use — the keys are well-spaced, have nice travel, and the printed font is very legible. The back-lighting is nice and bright too, and since this is a 14-inch laptop, there is no number pad crammed onto the right side. HP did a great job with the keyboard layout and the actual keys. I love that it has a super key rather than a Windows key!

The trackpad is as good as you can expect from any laptop-maker not named Apple. Unlike Apple that uses a faux-click so that it feels like the trackpad clicks evenly throughout, HP used a traditional trackpad that actually moves and clicks into two lower buttons hidden underneath. This means that the trackpad is harder to click towards the top, and easier at the bottom. This is how almost all laptop trackpads function, so I suppose it just “is what it is.”

Since this is a developer machine, it also has a pointing nub centered between the G, H, and B keys, similar to what is found on Lenovo’s ThinkPad computers. I find these nubs to be unusable as they are far too sensitive, but since companies continue to include them, I suppose someone out there must actually like them. There are right and left click buttons above the trackpad for when using the nub, but you can technically use these buttons while using the trackpad too. 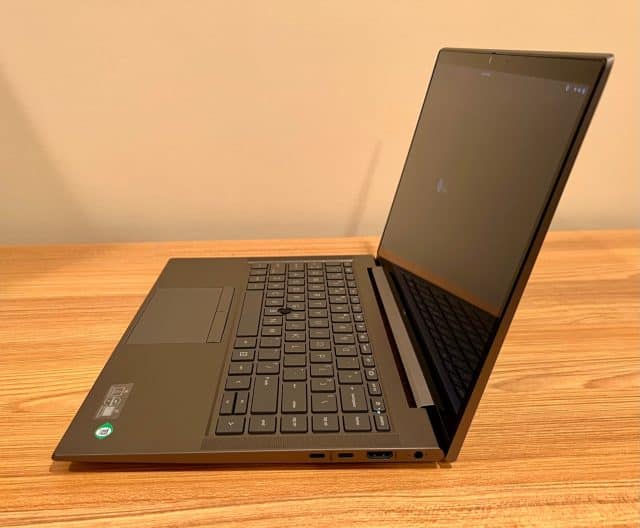 When consuming media, the speakers and display are quite important, and HP has really hit a home-run here. The screen is “only” 1080p, true, but it is still crisp and gorgeous. More importantly, the 1,000 nits is insanely bright and should prove indispensable for those working outdoors. Some users with vision problems that need extra brightness will appreciate this screen too. With all of that said, the glossy screen is very reflective so it can hard to position it at the right angle to avoid glares.

The speakers are a real surprise, as they are upward-firing and get very loud. Whether listening to music, watching video, or playing games, audio is a real treat. And yes, there is a 3.5mm audio jack if you want to connect headphones. Unfortunately, the internal cooling fan is a bit noisy, producing a static-like sound, so when there is a break in the audio, you may hear the fan rather than silence. The fan isn’t obnoxiously loud, but I find it to be audible almost constantly.

HP claims you can get 12 hours of battery life, but as we all know, these claims are always based on unrealistic usage scenarios, such as having the brightness turned down nearly all the way. In my experience, doing typical tasks like writing, listening to music, editing images, and watching YouTube, I average about six hours before needing to charge. In other words, you can realistically expect to get about half of what HP claims; that could be alright depending on your needs. For me, six hours is more than fine, as I tend to use laptops docked at home. 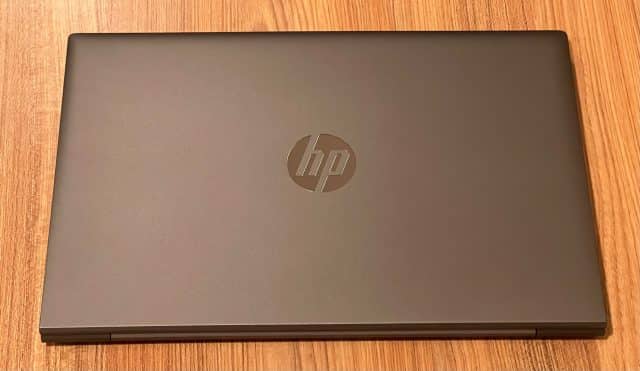 Yes, the HP Dev One makes a mighty fine makeshift desktop when connected to a monitor, keyboard, and mouse. While it does not have Thunderbolt, it does have USB-C, so you can connect it to a USB-C dock (such as this one) or monitor to create the desktop experience. In my case, I connected Dev One to a 4K USB-C monitor that has an integrated USB-A hub. With a single USB-C cable going to the HP Dev One, it connects to the monitor, a wired mouse, and a wired keyboard all while charging. Pop!_OS looks great on a 4K display with scaling set to 200 percent.

Speaking of Pop!_OS, that is the real star of the show here. HP selected this Ubuntu-based operating system for the Dev One which is very significant. This moves Pop!_OS from being a niche OS to the mainstream. Best of all, System76 is going all-in on supporting the Dev One, not just from a software perspective, but customer service too. You see, System76 has trained HP employees on how to troubleshoot issues, but also, HP has the ability to reach out to System76 for escalated issues. Ultimately, you can be confident that System76 will focus on the HP Dev One just as much as its own machines. 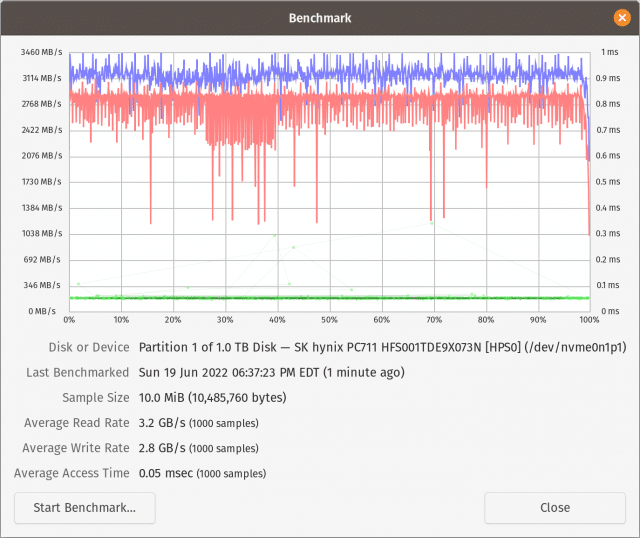 The HP Dev One has some excellent hardware choices, including the powerful AMD Ryzen 7 PRO 5850U octa-core APU, 16GB DDR4 3200 RAM, and the 1TB NVMe solid state drive. The SK hynix PC711 SSD is very fast for a PCIe 3×4 drive, but it is not as fast as newer PCIe 4×4 drives. With that said, other than in benchmarks, you aren’t likely to notice a difference between PCIe 3×4 and 4×4 anyway.

Other than the aforementioned audible fan and less-than-claimed battery life, my only other gripes are the Wi-Fi card and webcam. You see, HP chose 802.11ac (Wi-Fi 5) rather than the newer and better 802.11ax (Wi-Fi 6 or 6E). While the older Wi-Fi standard is perfectly fine, and Wi-Fi 6/6E routers aren’t very widespread, it would still be nice to have a newer card for future-proofing. The webcam is actually fairly decent, but it is only 720p rather than 1080p. In 2022, I expect a quality laptop to have Wi-Fi 6 and a 1080p webcam. Just sayin’… 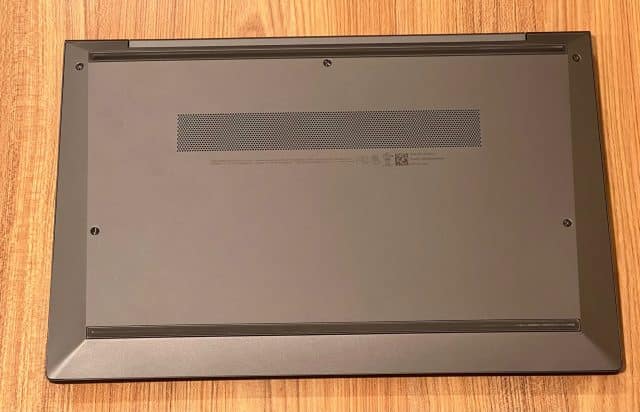 Should you buy the HP Dev One? Well, first things first, while it is a developer-focused machine, it is not only for developers. Anyone that wants a quality laptop that comes with a Linux-based operating system pre-installed should absolutely check it out. This is a fine laptop for developers, students, business users, home users… hell, anyone. The AMD Ryzen 7 PRO 5850U APU is even capable of light gaming.

Look, folks, the HP Dev One is thin, fairly light, and very solidly built. The specs are all respectable and both the RAM and storage are user-upgradeable. Pop!_OS is one of the easiest Linux distributions for beginners, but even expert-level Linux users love it too. When such wonderful software and hardware come together, greatness happens. This is simply a great laptop that is a joy to use. At $1,099 you just cannot go wrong.

The HP Dev One can be purchased here now.