A month ago, Microsoft announced a change to the Windows Insider program that would see Dev Channel releases becoming “more experimental”. As a result of this, the last two builds have introduced bigger changes and new features.

Today’s new flight, Build 22567, continues this trend and comes with some new features and a load of changes and improvements.

SEE ALSO: Tweak UIX brings back the main tool missing from Microsoft’s PowerToys and gives you complete control over Windows 11

Probably the biggest addition is a new security feature called Smart App Control (SAC) that blocks untrusted or potentially dangerous applications. The feature can only be enabled on Windows devices that have performed a clean install with this new build or later. 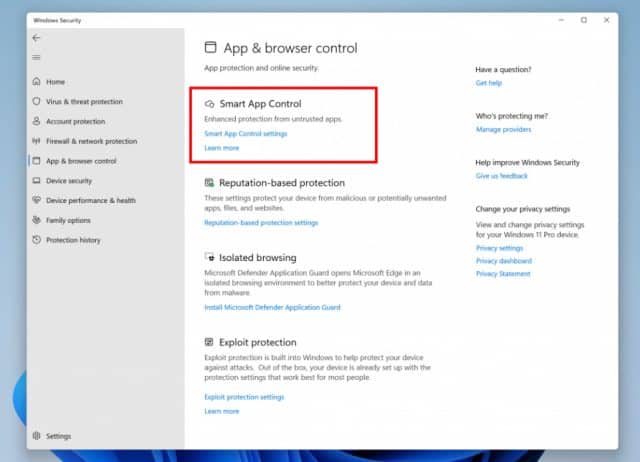 Microsoft will be releasing ISOs for clean install purposes in the coming weeks.

From this build, Windows Update will try to schedule update installations when electrical grids are powered by greater amounts of clean energy sources like wind, solar, and hydro. Microsoft explains: “This feature will only be enabled when your PC is plugged-in and regional carbon intensity data is available from our partners electricityMap or WattTime.”

This new feature is rolling out and will not be available to all Insiders just yet.

This build also sees improvements to the Microsoft 365 subscription management feature in Settings, including the addition of payment details in the subscription card experience.

You can now link an Android phone to a PC as part of the device setup, giving you access to everything on your phone, from your PC.

Other changes and improvements in this build include:

Microsoft has updated the “Open with” dialog box to align with Windows 11 design principles. The updated dialog box honors light/dark theme. Microsoft has also simplified the experience by making it possible to update your default app with just one click. [It is beginning to roll this feature out, so it isn’t available to all Insiders just yet

When you hover one pinned app icon over another, there will now be a small animation to hint that this will create a folder.

Microsoft is updating multi-finger touch gestures to include responsive and delightful animations that follow your finger.

Microsoft has made updates to pages across the Settings app to adopt WinUI controls for consistent look and feel across the app.To make it easier to find settings within the app, Microsoft has made improvements to how searching for settings works behind the scenes. These improvements will provide users with a more accurate set of search results as well as bring more relevant search results up to the top of the list.You can now mute and unmute your audio by clicking the volume icon in the hardware indicator for volume.

The redesigned Task Manager that began rolling out with Build 22557 is now available for all Insiders in the Dev Channel.

Fixed an issue where users weren’t hearing the startup sound.

Using the taskbar to bring an already running app to the foreground should work more reliably now.Fixed an issue where if you changed time zone the calendar flyout wouldn’t update to reflect a date change.Using Narrator key plus Enter or Narrator touch gestures should now work to activate items in the taskbar now.Mitigated an issue that was causing windows to be able to draw on top of the taskbar after dismissing one of the taskbar flyouts.

NOTE: These fixes will only show if tablet-optimized taskbar is enabled on your device, which is beginning to roll out to Windows Insiders and not yet available for everyone.

The taskbar setting has been changed to “Optimize taskbar for touch interactions when this device is used as a tablet”.Microsoft has improved mouse click reliability of system tray icons.

Fixed an issue affecting the reliability of the Start menu opening.Fixed an issue where dragging a pinned app icon between pages of pinned apps wasn’t working.Addressed an alignment issue with the More button.

Clicking the buttons in the new OneDrive flyout should now bring those objects into foreground focus.Star rating supported files (for example mp4 files) should work again now.Fixed an issue that could cause explorer.exe to crash when opening the context menu sometimes.Improved the performance of displaying the content in the Recycle Bin in cases where there were many files.Addressed an underlying crash that was happening when trying to start a search from File Explorer, impacting the ability to search.Fixed a rare issue for people with small screens where the context menu in File Explorer would animate in downwards, disappear, then immediately reappear animating upwards.

Improved input switching responsiveness when using WIN + Space.Fixed an issue which was leading to some Insiders seeing black text on a dark background in the input switcher.Addressed an issue where the Japanese IME toolbar could become transparent, and the IME candidate window clipped or not displayed at all.If you’re using the Japanese IME with a vertical candidate list, the text should now appear written in the correct direction.Updated the icon used for hiding key press visuals in the touch keyboard when focus is set to a password field to help make it easier to understand.Fixed an issue where the new “Press Backspace” command when voice typing wasn’t working in Japanese.Mitigated an issue that was causing Narrator focus to get stuck in the wrong place after inserting an emoji and dismissing the emoji panel.

Items in the app list under Apps > Installed apps should no longer overlap each other.Fixed an issue where it wasn’t possible to select the restart now button in Settings > Windows Update using touch.

Explorer.exe shouldn’t crash anymore when dragging a window between monitors.If you’re hovering over a Desktop thumbnail in Task View, the tooltip should now actually match the one you’re hovering over.Fixed an issue where snap assist might unexpectedly trigger when you already had a window snapped in that area.Improved reliability of invoking snap layouts at the top of the screen.Task View should now successfully launch if you invoke it while the search flyout from the taskbar is open, rather than invoking and immediately dismissing.

Fixed an issue causing high CPU usage while using Narrator.Narrator will now read out the theme as well as the selection state in Settings > Personalization > Text input > Theme.When a dialog pops up, Narrator will now consistently announce that it’s reading from a dialog when reading its message.When using Microsoft Edge’s History page, Narrator will now announce the name of the page and the focused element correctly.Fixed an underlying issue which was impacting Narrator keyboard navigation in webview2 in certain apps.Updated Braille display input and output table type dropdowns in Settings to have a default value now.Fixed an issue that was causing Narrator to hang when using Norton Power Eraser.If you Review > Check Accessibility in Excel, Narrator will now read the errors, warnings, tips & intelligent services section correctly.

[Lock screen and logging in]

Notification Center will now close when you start a focus session, and the focus timer opens instead of you having to dismiss it.Fixed an issue which was impacting the ability of opening Quick Settings and Notification Center when animations were disabled.Quick Settings and Notification Center should dismiss more reliably now if you had used a gesture to invoke them before trying to dismiss them.Fixed an issue relating to the UiaDisconnectProvider API which was causing certain apps to crash.Mitigated a bug check which was happening in the last few flights for Insiders with more than 8 monitors connected.If you have pinned an app to the taskbar within Windows Sandbox, clicking the app to launch it will now actually work.

NOTE: Some fixes noted here in Insider Preview builds from the active development branch may make their way into the servicing updates for the released version of Windows 11 that became generally available on October 5th, 2021.

Users running Windows 10 who try to upgrade directly to build 22563 or higher in the Dev Channel may encounter an install failure with error code 0x8007007f. To bypass, please join the Beta Channel, install the offered Windows 11 build there, and then switch to the Dev Channel to receive the current Dev Channel update. This issue is understood and will be fixed in an upcoming build.When going through the device setup experience (OOBE) on the Enterprise edition, the network add screen will be skipped on the first attempt. As a workaround, when users see the “name your computer” option, please reboot and re-start OOBE. The network add screen will now appear as expected.Microsoft is investigating reports from Insiders that Windows Mixed Reality is not working starting with the previous flight, due to repeated explorer.exe crashes.Scroll bars are not rendering appropriately on some Win32 applications. This bug is visual only as users are still able to click/drag the scroll bar as expected.

If you right click on the Start icon in this build or press WIN + X, explorer.exe will likely crash. Please use CTRL + Shift + Esc for the time being if you use this menu to launch Task Manager.

The taskbar icon and tooltip may not match the focus state.The Clock app does not yet update Windows Focus state when configuring focus sessions within the app. This will be addressed in a future app update.

Some tooltips do not accurately display the preferred visual setting when Task Manager is configured for dark mode.