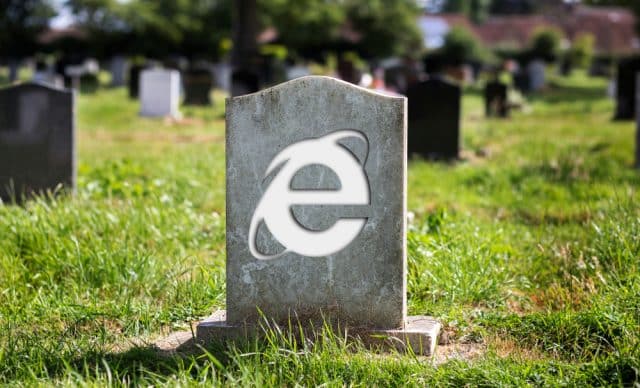 Internet Explorer was once the dominant web browser, boasting a 95 percent market share in 2004. The arrival of better and faster browsers like Firefox and Chrome, along with the rise of smartphones, slowly destroyed its ubiquity and from today it is now officially retired and out of support.

While few people will mourn its passing, the browser is still used by many businesses and individuals who simply haven’t bothered to switch from what they know. For those users, Microsoft’s solution will be a predictable one.

In a blog post announcing the browser’s retirement, Microsoft says:

As part of this redirection process, users will have their data like favorites, passwords and settings imported from Internet Explorer — this will help make the transition to Microsoft Edge both familiar and simple. If a user wants to delete or manage their data at any point after, they can always do so in Microsoft Edge from the Settings menu.

The company also has a video showing users how they can make use of IE mode in Microsoft Edge.

Microsoft says the future of Internet Explorer is Microsoft Edge, but other browsers, like Chrome and Firefox might suit users’ needs better, and there are some equally great — arguably better — choices available, like Brave and Vivaldi.

Although Internet Explorer is no longer supported from today, users will be able to continue to browse with it for a while yet, as Microsoft explains:

Today’s retirement covers all currently supported versions of Windows 10 Home, Pro, Enterprise, Edu and IoT (Internet Explorer is already removed from Windows 11). Internet Explorer will not be immediately removed on all these versions today but will be progressively redirected to Microsoft Edge on all these devices over the next few months (just like for everyday users) to give our customers time to find any sites they potentially missed and complete their transition.

Don’t think you can just ignore the warnings though. After this ‘redirection phase’ Microsoft will permanently disable the browser on devices via a future Windows Update.