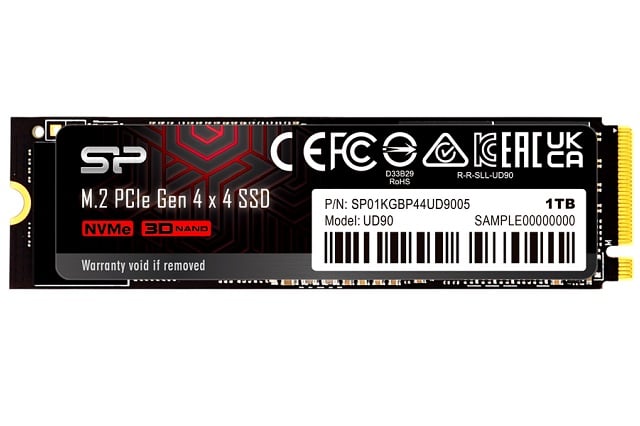 Are all PCIe 4.0 solid state drives fast? Absolutely. However, they aren’t all the same speed. For instance, the Mushkin SSD we covered here can achieve read speeds up to 7,415MB/s — that is really fast. A new SSD called “UD90” from Silicon Power, however, can only do up to 4,800MB/s.

Yes, folks, we have two M.2 drives, both with the same PCIe Gen 4×4 interface, but one is significantly faster than the other. In other words, the UD90 is rather slow as a PCIe Gen 4.0 drive… comparatively. And yet, compared to SATA-based solid state drives, the UD90 is actually incredibly fast.

With all of that said, it is technically correct to say the UD90 is both slow and fast at the same time — depending on what you compare it against. So why would anyone choose a slower PCIe Gen 4×4 drive? Because Silicon Power is intending for the UD90 to be a budget-priced SSD, and its performance is more than adequate for the vast majority of consumers. It may save you a few bucks.

“Give your system the power of PCIe 4.0 with the budget-friendly UD90. Providing the best bang for your buck, it reaches read speeds up to 4,800MB/s and write speeds up to 4,200MB/s. It also boasts 2x faster data transfer rates than its predecessor, PCIe 3.0, for sustained use and dependable performance. With this much efficiency, the UD90 allows you to maximize your creative output at an unbeatable value,” explains Silicon Power.

The company adds, “Don’t lose your train of thought with slow load times! Designed with content creators in mind, the UD90 is built to handle the demanding levels of multi-tasking that’s required of creative production, effortlessly. With support for NVMe 1.4 and Host Memory Buffer (HMB) technology, the UD90 offers uninterrupted productivity via higher performance and lower latency for seamless execution across applications.”

If the PCIe Gen 4×4 UD90 is designed to be budget friendly, then how much does it cost? Well, it pains me to say this, but Silicon Power has not yet revealed pricing — annoying, I know. The price will be known once it goes on sale here.

Please note: Some of the above links may be affiliate links, meaning we, or our writers, may receive payment if you purchase one of these items (or other items) after clicking on them.