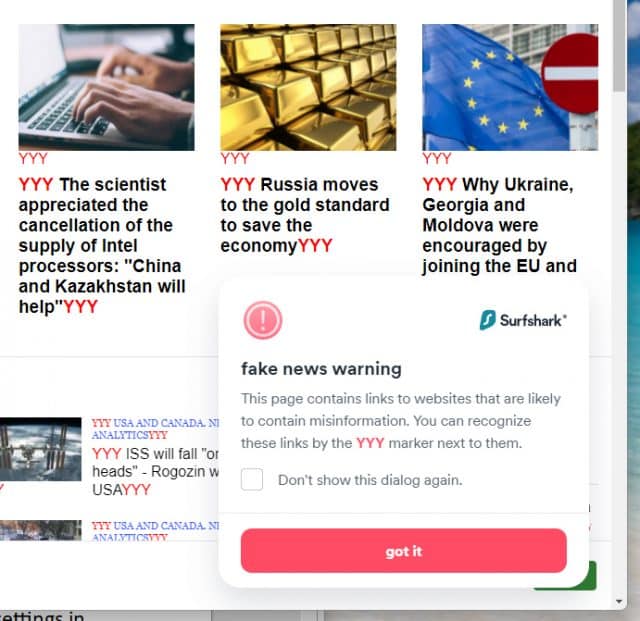 Fake news and disinformation has long been a problem on the internet and no more so than at present as both sides in the Ukraine conflict engage in an information war.

It’s timely then for Surfshark to launch a free extension for Chrome and Firefox that detects and highlights website links from various media and other websites that are known to spread fake news and misinformation.

“The 21st century has shown that information might be sharper than the sword. It’s evident that today’s disinformation campaigns aim to distract, confuse, manipulate, and sow division, discord, and uncertainty in the community. Keeping in mind the intensifying propaganda, we decided to release a feature that would allow people to identify fake news websites easily,” says Vytautas Kaziukonis, CEO of Surfshark.

The Fake News Warning (FNW) feature detects specific URLs from a list of websites and highlights them with a YYY symbol. The list of sites is taken from propornot.com and reviewed by Surfshark security experts.

To highlight fake news sites, users need to download the Surfshark VPN extension on Chrome or Firefox. There’s no need for an account or a Surfshark subscription to access the FNW feature, it’s free for anyone to use. Existing Surfshark users can toggle this feature on or off under the VPN settings in their extension.

Surfshark’s security officer Aleksandr Valentij advises using the tool alongside other fact-checking resources, “There are a lot of fact-checking resources on the internet that can help people clarify the situation about the most important events as experts took time to examine those in-depth. For example, media outlets such as the Australian Associated Press, RMIT/ABC, Agence France-Presse (AFP), and Bellingcat maintain lists of fact-checks their teams have performed for Ukraine’s invasion.”

You can find out more and get the extension on the Surfshark blog.