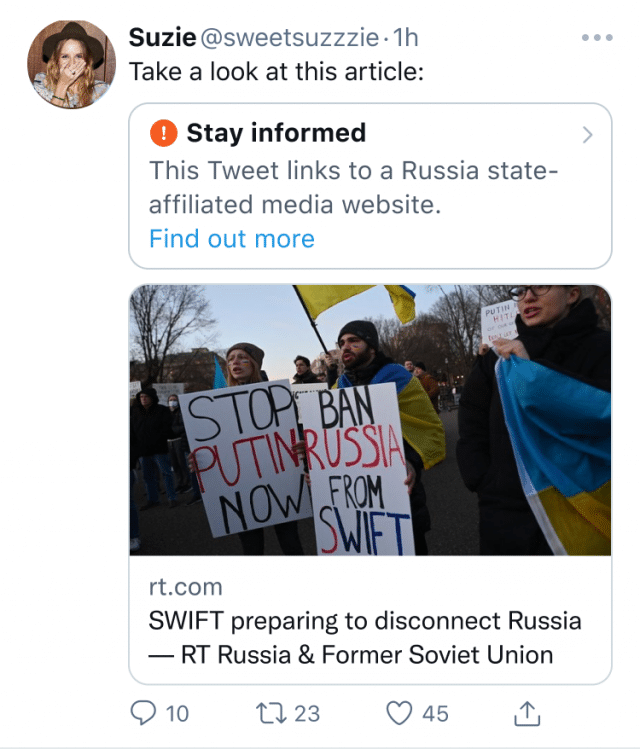 Russia’s invasion of Ukraine has brought immediate condemnation from other countries, and while they won’t be sending in troops to help the Ukrainian fight-back, the barrage of sanctions coming from all angles is certainly going to hit Russia hard.

We’ve been seeing companies and organizations doing their bit to put the pressure on Putin’s Russia too — hacktivist collective Anonymous has certainly been hard at work here — and today, Twitter has announced it will increase its fight against misinformation coming from Russian media organizations.

A tweet from Yoel Roth, Twitter’s Head of Site Integrity, explains that from today the social network will be adding labels to tweets to make it easier to identify any that come from Russian state-affiliated media websites.

That’s not all though. The company will also be taking steps to reduce the circulation of this content on Twitter.

Roth goes on to explain in the thread:

As people look for credible information on Twitter regarding the Russian invasion of Ukraine, we understand and take our role seriously. Our product should make it easy to understand who’s behind the content you see, and what their motivations and intentions are.

We’ve learned that labeling Tweets is another way we can add helpful context to conversations around some of the most critical issues, such as COVID-19 and elections happening around the world.

This work builds on the numerous steps we’ve taken over the past week — from pausing ads in Ukraine and Russia, to launching timeline prompts with context about the crisis. We remain vigilant and will keep you updated along the way.

Today, we’re adding labels to Tweets that share links to Russian state-affiliated media websites and are taking steps to significantly reduce the circulation of this content on Twitter.

We’ll roll out these labels to other state-affiliated media outlets in the coming weeks. pic.twitter.com/57Dycmn8lx