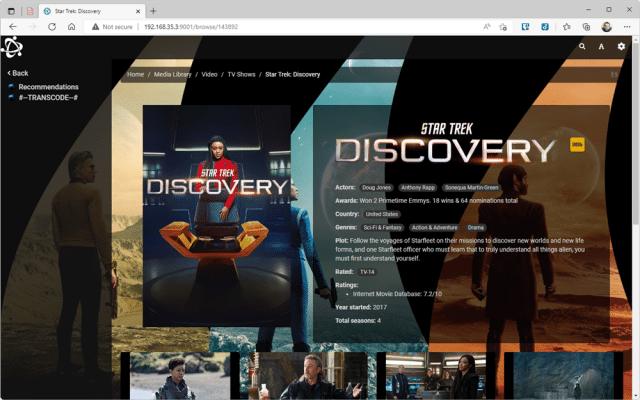 The UPNP/DLNA-compatible media server boasts a significantly improved web interface, helping give the server a more modern look to go with its modernized code base.

Version 11.1.0 follows less than a week after version 11.0.0 was released. Its highlights include improved web caching of web interface files and several bug fixes and dependency updates, but is naturally eclipsed by the earlier major update.

From 11.0.0, the web interface employs backgrounds and logos across its pages for movies, TV shows and individual episodes. Based on these images, the UI also switches automatically between dark and light themes as required.

When viewing videos through the web interface, quality adjustments are automatic, although users also have the option to apply manual settings too. A new HLS video option also has the potential to improve transcoding support through selected renderers such as Philips smart TVs.

Elsewhere a new network state scanner has been implemented along with support for editable server-side playlists. The API not only matches more TV series, but also boasts improved metadata matching while offering faster API lookups.

There are also unspecified improvements to both the web interface itself as well as the web video player, while beneath the hood the code base has been modernized through code refactoring and dependency updates.

Universal Media Server 11.1.0 is available now as a free, open-source download for Windows, Mac and Linux. For a complete changelog for both version 11.1.0 and 11.0.0, check out the project’s Github releases page.