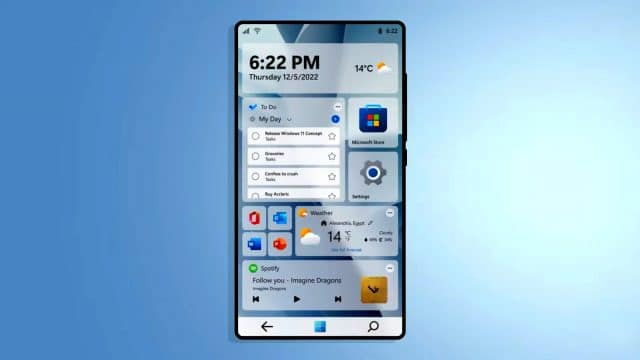 Microsoft certainly bet big on Windows 10 Mobile, even going so far as to buy phone giant Nokia in order to make its own handsets for it. While there was much to recommend the tiled mobile operating system, the combined might of iOS and Android proved too strong for the would-be rival. Windows 10 grew into a great operating system on PCs and tablets, but the company was forced to pull the plug on its mobile aspirations.

Windows 11 is slowly replacing Windows 10 (with the emphasis on ‘slowly’) but given the chance, would it fare any better on mobile than its predecessor did?

SEE ALSO: Windows XP 2022 Edition is everything Windows 11 should be

Microsoft hasn’t announced any plans for a mobile version of Windows 11, but concept creator AbdelRahman Sobhy has put his creative abilities into imagining what the mobile OS might look like, and it’s impressive, to say the least.

The concept has a big focus on customization. You can change the look of the taskbar, there’s a new Start menu, a redesigned Action Center, and swiping left brings up notifications. You can choose to have more pinned apps on the menu, more recommended apps, or neither, and it has a consistent design across the OS, something Microsoft can only dream of in the real world.

There’s also a new Files app linked to OneDrive, a new volume slider, and a clever approach to multitasking. And of course as it’s 2022, there’s a stylish dark mode too.

I think it looks great, but whether I’d swap my iPhone for it is another story. What’s your view on this concept? Share your thoughts on it in the comments below.